Audrey has been fighting going to sleep at night for awhile. It seems it’s time find a way to shorten or get rid of her nap. When she takes a nice nap, she will keep popping out of her bed for several hours or she will lay there awake for a really long time. She’s just not tired at night. The transition will be challenging, she gets so tired in the afternoons. The good thing is that it’s no trouble falling asleep at night, but she’s so cranky and emotional until we get there.

Instead of sleeping in her bed in her room in the afternoon, I’m just setting her up with books, a pillow and blanket on the chair in the living room. She will still fall asleep, but not as long as she would in her room. I’m hoping that little bit of sleep will help up survive until bedtime. 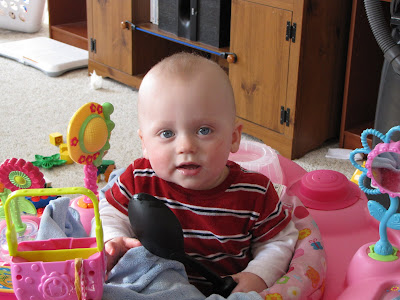 is the one of the reasons he can get away with waking at 4:30 in the morning and not be shipped to Nana’s house immediately. 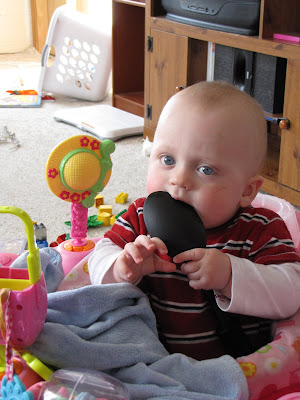 Maybe that’s why God made them that way? 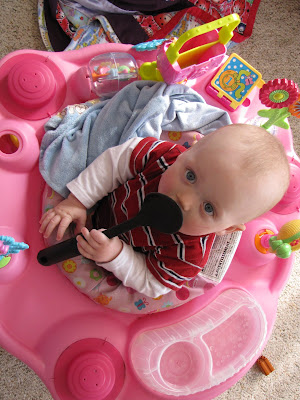 Isaac is only taking two 45 minute naps a day.

I let him cry to see if he will go back to sleep, but he just screams until I get him. I wish I could get more than 1 1/2 hours of time to do things around the house.

Ethan wasn’t great, but he napped a little better than this. Audrey has always been a good napper. She naps longer than Isaac does. So, I’m hoping that it isn’t my fault that this isn’t working well.

We’re all home and the cake was a big hit. Nathan didn’t have to go in to work yesterday. It was nice to have an extra day with him after his 4 day absence. The kids are monopolizing him as much as possible and making up for lost time. Right now, they are downstairs working on Ethan’s car for the pinewood derby race for AWANA this week. Yesterday we all went to McDonalds for supper. The kids climbed and climbed the playland structure. Audrey was the one who showed Ethan how to get to the big slide. He would keep turning the wrong way and end up on the smaller slide. I guess the little sister can teach the big brother something now and then.
With Nathan back, I was able to run yesterday and today. I hope to get one more run in for this week since my running week ends on a Sunday. If I get out tomorrow, I should have a record high mileage week of 14 miles! The sun has been out and the 30 degree temperatures feel pretty warm when I’m running.
Grocery shopping and meal planning is done for the week. I can’t believe it’s going to be March in 2 days! Spring cannot get here soon enough!
Isaac is still on strike against his 3rd nap of the day. This makes me very sad, but it’s been about 3 days now that I’ve laid him down and he cries for an hour until I go and get him. I can’t bring myself to leave him for longer than that when he’s screaming the entire time and by that time it’s 4:30. It’s frustrating because I know he’s tired. His earlier nap only lasted about 40 minutes. I wish there was an “easy” button to solve this dilemma. It’s not like he’s just not tired and would happily play if I didn’t lay him down. He’s cranky and wants my attention. If I walk by him, he starts to cry . I’ve resorted to sneaking past him when I have to go through the room where he’s playing because seeing me changes him from happily playing to pathetic sad cries. I suppose it will get better soon.

Here are some cute pictures to make it all better. 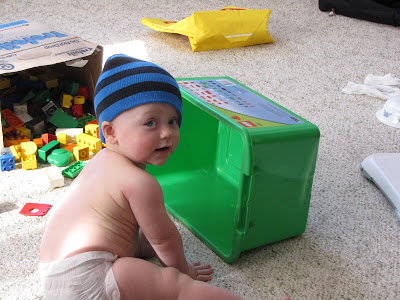 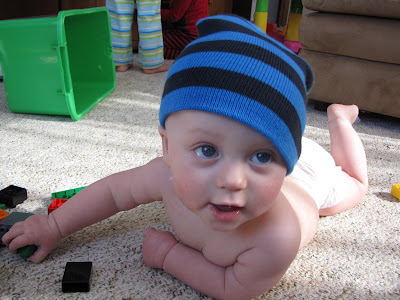 Today was a church day. The kids skipped last week because I wasn’t home and Nathan was too exhausted to get them out the door.

Audrey slept on the way to church. Our trip to church took a little longer than we planned. We had to slow down for some road work right as we were leaving town and then a few miles down the road, we ended up on the same route as a triathlon. They were doing the bike part of the race. I’m sure it isn’t normally that big of a deal to have hundreds of bikes on this particular road, but since Hwy 7 is closed for miles, the road the bikes were on was a little more busy then normal. They don’t close the road to traffic so there were hundreds of bikers and cars going both ways and trying to pass the bikers. A little tricky to pass since the line of bikes extended for miles. The cars would pass a couple and try to get back into their lane before hitting oncoming traffic and without running the bikers off the road. Why didn’t they reroute traffic for the safety of racers and the drivers? I don’t really get it.

The longer drive resulted in Audrey sleeping a little longer in the car. I think that’s one reason she refused to take a nap today. This is what she looked like at 5:00. She was snoring in bed before 6:00 (I think that was the time).
Ethan found a water gun in a Target advertisement that he HAS to have. I told him he could. The catch is that he has to earn it. Here he is working for his water gun. He has lots and lots of work left to do before he earns that elusive toy!